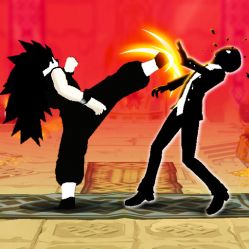 The fighters trained under the shadows have just been preparing for the world's most excellent fighting contest with the Shadow Fighters Hero Duel! These fighters can even fight at night. They are talented and powerful. There will be eight fighters during this championship. You can pick any of the fighters. The fights will be realized in different places. You can play in single player mode or in two player mode. You can fight against different fighters in story mode either! Let the fighting championship begin!