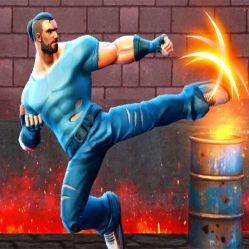 Try Street Mayhem - Beat `Em Up now to fight bad guys and mutant bosses. The characters Edward, Jeniffer and Russell will accompany you and you will be able to defeat the enemies with different techniques in combat. You can play with two players or complete the missions with the story mode.

Choose your character and start the fight now to complete the Dark City, Forest, City Town and Castle chapters! Also, at the end of each level, a boss will appear as an enemy. You can gain an advantage by collecting the weapons, sticks and knives that will come out of the boxes. In the two player mode, a surprise box will drop every 10 seconds and you will be able to gain an advantage against your friend with the weapon that comes out of it.